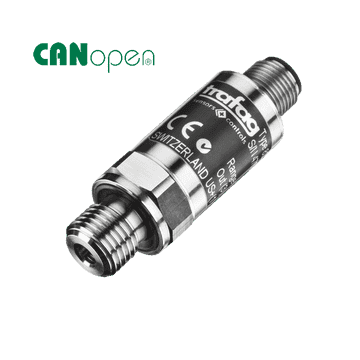 «Trafag AG released the CMP 8271 pressure transmitter implementing the CiA 404 CANopen device profile for measuring devices. Sensor variants are available for relative and absolute pressure measurements from 0,25 bar up to 700 bar with a resolution of 0,01 %. The completely-welded sensor system without additional seals uses the thin-film-on-steel measuring principle. The given shock (up to 100 g) and vibration (up to 50 g) resistance as well as the operating temperature from -40 °C to +125 °C makes the device suitable for harsh environments in demanding applications such as mobile hydraulics.

The device supports CAN bit-rates from 10 kbit/s to 1 Mbit/s with automatic bit-rate detection as well as 11-bit and 29-bit CAN-Identifier. Parameter saving for CANopen communication and application parameters as well as a flash update are available. The transmitter can produce an emergency message. It also supports a self-starting function according to the CiA 302 CANopen additional application layer framework. By means of the implemented LSS (layer setting services) according to CiA 305, the device’s node-ID and bit-rate can be configured via the CANopen network.

The device implements the CiA 404 CANopen device profile for measuring devices and closed-loop controllers. Measuring and transmitting frequency can reach up to 1 kHz. The magnitude adjustable physical units such as bar, Pa, psi, mmHg, mmWC, atm, at, °C, °F, and K are selectable. Four pressure and four temperature thresholds can be defined. Furthermore, the auto-zero function is implemented. The two available TPDOs (transmit process data objects) can be triggered by an event or a timer as well as sent cyclically. The implemented SDO server allows to read/write the parameters of the device’s CANopen object dictionary. The manufacturer also provides the CMP 8270 dedicated for measuring ranges up to 600 bar».

Source: CAN in Automation (CiA), www.can-cia.org

Do you have any questions about our CMP 8271?